The anterior abdominal wall fails to form normally and abdominal contents can push out through the defect into the amniotic cavity. The defect is usually to the right of the cord insertion at the umbilicus.

The cause of gastroschisis is not understood. It is not usually associated with known genetic defects or other congenital anomalies. Possible links to various environmental pollutants have been suggested, including proximity to landfill sitesand certain pesticides.

It is thought that development of the anomaly may be a consequence of vasoconstrictive episodes in early pregnancy. Gastroschisis can affect any pregnancy but known maternal risk factors include smoking; younger age; low BMI; socially disadvantaged groups; substance misuse; use of aspirin and anti-cold remedies.

Vaginal delivery is possible if all is well, though there can be associated intra uterine growth restriction.  Neonatal surgery is necessary soon after birth to replace the bowel in the abdominal cavity. The majority do well but some babies have long term problems with feeding due to bowel wall atresias or thickening. 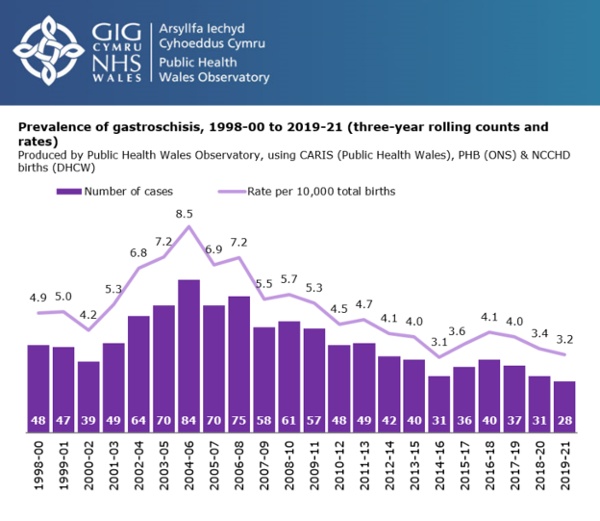 This is an abnormal opening in the diaphragm that allows part of the abdominal contents to move into the chest cavity before birth. The contents can compress the lungs and compromise lung development.

If the diaphragm does not close completely at 6 weeks, some abdominal organs can pass into the chest when they return to the abdomen from the umbilical cord at 10 weeks. The cause for this is unknown but there is a recurrence rate of 2%.

There is an association with chromosomal disorders particularly trisomy 21, trisomy 18 and deletion of the short arm of chromosome 12.

CDH is often seen at the anomaly scan. CARIS records that 63% were detected antenatally (including all gestations). The hernia is most common on the left with cardiac displacement from left to right. The stomach may be visible next to the heart and the right lung may look compressed.

What about management and outcome?

Early compression of the lungs between 17 and 24 weeks gestation usually predicts the degree of pulmonary hypoplasia. Delivery is best planned in a specialist unit equipped to provide respiratory support. Surgical repair takes place after stabilisation.

The outlook has improved with advances in neonatal intensive care. CARIS reports that 75% of cases survived to the end of the first year of life.

This is when the sutures between the bony plates of the skull fuse prematurely. The normal fusion of most of the sutures occurs when the baby is about 2 years of age. Single or multiple sutures can be involved and it may form part of a syndrome with a recognised pattern of anomalies e.g. Apert syndrome.

No clear cause has been found.

Craniosynostosis alone is not normally detected on ultrasound.

What is the pattern of craniosynostosis in Wales and the world?

What about management and outcome?

Usually diagnosed in the first year of life, surgery may be necessary to enable the cranium to develop properly. This is also important to prevent raised intracranial pressure and improve appearance. It is performed at one of the designated specialist centres in England usually between 6 and 12 months.

Upper and lower limb reduction defects occur when a part of or the entire arm or leg of a fetus fails to form completely during pregnancy. This means the limb is reduced from its normal size or is missing.

These defects can occur as isolated or as part of a syndrome. Isolated defects can be caused by the presence of amniotic bands in utero which can cause transverse defects of the limbs. Vascular compromise due to the drugs misoprostol or  phenytoin or the procedure of chorionic villus sampling can cause defects. Teratogens that affect the morphogenesis of the limb include thalidomide, warfarin, phenytoin and valproic acid.

Mothers using any of the drugs mentioned above are at increased risk. Chorionic villus sampling before 10 weeks gestation has been reported to be associated with the subsequent development of limb defects (ref below). Smoking may be associated but more research on thi is needed.

Visualising the four limbs is on the agreed checklist of the fetal anomaly scan at 20 weeks. This results in good antenatal detection.

What is the pattern in Wales and the world?

What is the management and outcome?

Good antenatal detection and discussion can prepare parents for birth and ensure early access to orthopaedic services. Outcome is better in isolated cases

Developmental Dysplasia of the Hip

The cause is unknown but thought to have genetic and environmental influences.

If the acetabulum is shallow and the surrounding connective tissue is lax the hip is more likely to dislocate. This may explain the increased frequency in females with sensitivity to the relaxing effects of oestrogen.

The risks are increased if the baby is large or a breech presentation. Vaginal breech delivery poses a higher risk than delivery by Caesarean section. Reduced liquor, first born babies and multiple pregnancy are other risk factors.

Having a sibling with hip dysplasia increases the risk.

This is not diagnosed antenatally but after delivery those babies who had a breech presentation, talipes or spinal abnormality indicate the need for closer attention.

Manual procedures to detect developmental dislocation of the hip include Ortolani’s and Barlow’s test.

If there are risk factors or problems with the manual checks then an ultrasound can confirm the diagnosis.

What is the pattern in Wales and the world?

What is the management and outcome?

Early diagnosis is important. The longer the hip is left in an abnormal position, the more the anatomy changes thereby increasing the need for surgical correction of the joint. Conservative measures include the Pavlik hip harness or Von Rosen splint. The chances of these working falls significantly after 7 weeks of age.