Neural tube defects are major congenital anomalies that can be fatal or give rise to serious disability. They are caused by abnormal development of the neural tube. Conditions include:

Neural tube defects usually occur as isolated defects but may also be associated with chromosomal or other multiple malformation syndromes.

The neural tube forms from the neural groove from week six of embryological development. Failure of the top of the tube to close results in these defects.

In the majority of cases the cause is unknown, but various factors can increase the risk of these conditions occurring

Antenatal detection has improved greatly with advances in ultrasound, which has replaced maternal screening with maternal serum alpha feto protein. Over 91.5% of cases of babies who have spina bifida and 94.5% of babies with anencephaly have their anomalies detected antenatally (based on CARIS cases 2010-2021).

Historically the prevalence of neural tube defects in Wales has been high, but falling:

At present approximately 50 cases per year of neural tube defects are recorded in Wales, with 9 of these live born.

Approximately half of cases reported to CARIS include spina bifida and nearly 40% include anencephaly, with some babies having multiple neural tube defects and other associated anomalies. 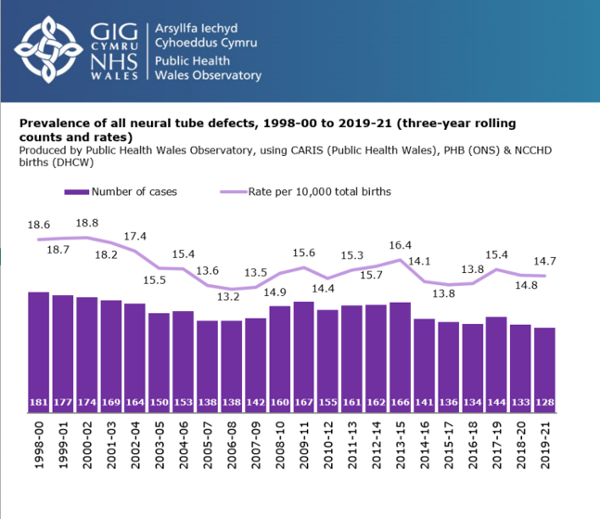 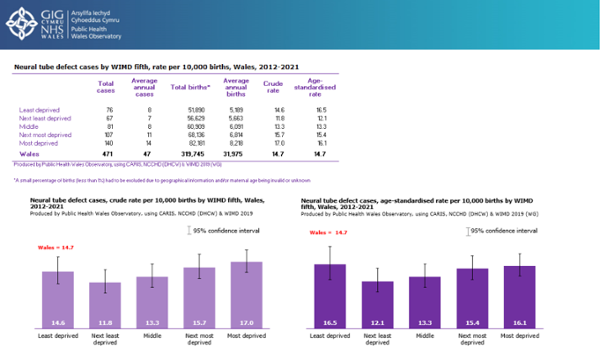 At local authority level there are differences in rates (of all NTDs) across Wales that are not explained by known patterns of variation in reporting. Rates appear higher across the south of the country, with the highest rates reported during the last decade for Carmarthenshire. This finding was investigated in 2007 although no cause for higher levels in Carmarthenshire could be found (John, 2007). Since then, CARIS has continued to monitor the situation. The most recent aggregated rate for Carmarthenshire was not that different to rates in some other areas in Wales, however this issue will be kept under review.

CARIS data show that rates of neural tube defects appear higher in the most deprived fifth of areas in Wales, compared to the least deprived (most affluent) fifth. However, the difference is not significant.

By age group, the highest rates are found in women under 25 or over 40 years of age. Rates among older mothers are likely to be linked to the increased presence of chromosomal anomalies which are a known risk factor for neural tube defects. It is possible that dietary intake of folate may also vary with maternal age.

The all Wales maternity record has introduced a system where maternal folate intake before and during early pregnancy is not captured with sufficient detail to be very useful. It is therefore not possible to assess maternal folate intake and how this might affect the prevalence of neural tube defects in Wales. Historical data for Wales reported to CARIS was incomplete but suggested that many mothers did not take folate at the time recommended to reduce the risk of neural tube defects.

International comparisons by EUROCAT suggest an overall rate of neural tube defects in Europe of  9.1 cases per 10,000 births (95%CIs 8.9 to 9.3) over approximately the past two decades (in press). In this analysis, Wales has the second highest rate in Europe, at 15.1 cases per 10,000 births (1998 to 2011). However these analyses take no account of maternal age and the time periods vary for data submitted by different registers. Different national policies for termination of affected pregnancies and completeness of reporting of cases lost in early pregnancy are also likely to have a significant effect on rates. Despite these caveats, the rates in Wales appear high compared to many other areas of Europe.

The pattern seen in Wales of a halt to falling rates of neural tube defects has also been noted in other areas of Europe (publication anticipated 2014/15), including Ireland (McDonnell, Delany, O’Mhony, & Mullan, 2014)

Most parents faced with a probable diagnosis of neural tube defect benefit from realistic advice from paediatricians and neurologists about the likely future for their baby. Spina bifida can cause a wide range of effects in particular cognitive, mobility and continence (bowel and bladder) problems. Management of spina bifida will often involve surgery and involves specialist and multidisciplinary support. Over recent years advances in treatment have resulted in a more positive outlook for spina bifida and most children survive into adulthood.

Given the potential for prevention of many cases of neural tube defects, it is important that women have access to additional dietary folate before or during the early weeks of pregnancy. Accurate information on maternal folate intake is invaluable in assessing the effectiveness of this advice. However, recording of maternal folate intake is poor in health records. Reasons for this may include the time required to record an accurate dietary history or maternal uncertainty in recalling exactly when she took supplements. Despite these limitations, existing data and experience from elsewhere suggest that many mothers do not take folate supplements at the recommended times and that there is further scope for prevention of neural tube defects through improving maternal intake.

An alternative preventive measure is the fortification of flour with folate, giving rise to a general increase in population intake rather than targetingwomen during the pre-conceptual period and pregnancy specifically. This measure has been introduced in various other countries that have demonstrated a subsequent fall in neural tube defect rates. Increasing population level intake of folate may also lead to reductions in some congenital heart disease and some adult cancers. Opponents of fortification of flour have  argued that this population level intervention may also have negative consequences through increasing the risk of some neurodegenerative conditions and also increasing the risk of colon cancer, although these risks are based on animal rather than human studies.

Given that Wales has one of the highest rates of neural tube defects in Europe, that the previous decline in rates in Wales has halted and that there is further scope for the primary prevention of these disabling conditions, CARIS intends to support further work on the issue to take forward in Wales.

Although no obvious cause was found on previous investigation, CARIS will work with relevant Health Boards to look again for any explanation for the findings of high levels in some areas of Wales and to make any further recommendations for further action that may help reduce future rates.

Hydrocephalus occurs when an abnormally large amount of cerebrospinal fluid (CSF) accumulates in the ventricular system of the brain. This fluid can cause pressure in the brain and cause mental and physical problems. It is the most frequent congenital brain anomaly.

Physical causes for the excess fluid can include:

The increased fluid is visible on ultrasound and a normal range of measurements has been agreed. A lateral ventricle measuring over 10mm is described as enlarged. If this is found, a search is done for other anomalies and a karyotype is offered.

Magnetic resonance imaging MRI) may be of value.

Antenatal interventions are not standard practice. Primary treatment at birth involves positioning a shunt to drain the CSF from the ventricles into the peritoneal cavity.

Outcome depends on the cause of the hydrocephalus and the presence of other conditions. If it is an isolated anomaly with no associated conditions then the outcome is better.