Sometimes changes can happen if one chromosome breaks off and attaches to another chromosome. These types of changes are referred to as translocations. Occasionally, in around 1 out of 100 cases some of the cells in the body are affected by the changes and some are not. This tends to make the effect of the chromosomal changes less serious. This is known as a mosaic chromosomal change.

Over 50% of pregnancies ending in miscarriage (Coelho, F.F., Marques, F.K., Goncalves, M.S. et al (2016) “Detection of aneuploidies in spontaneous abortions by quantitative fluorescent PCR with short tandem repeat markers: a retrospective study” Genet. Mol. Res. 15 (3): gmr.15038617) are as a result of a chromosomal abnormality. The overall rate of all chromosomal and other genetic disorders in Wales between 1998 and 2017 was 78.1 per 10,000 births. Only three trisomies are compatible with survival – trisomies 21, 18 and 13. Trisomy 21, also known as Down Syndrome is the most common of the three.

Only one monosomy is compatible with live birth and survival – this is a condition that only affects females and is known variously as Turner syndrome, Monosomy X or 45 X. 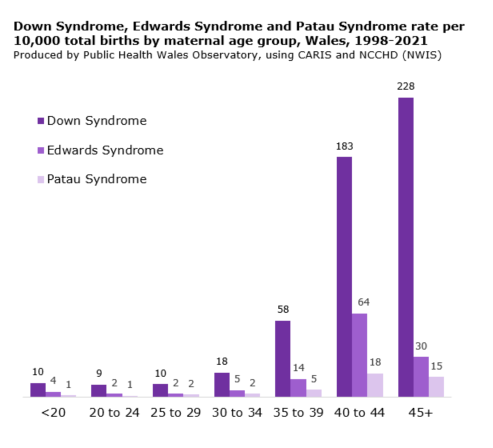 Most cases of Down syndrome (90%) are due to simple trisomy with the presence of an extra chromosome. A small proportion can be due to a Robertsonian translocation in which the additional chromosomal material is attached to one of the usual chromosome pairs. This condition may then be inherited and suggests the need for parental genetic studies.

Antenatal screening for trisomies 21, 13 and 18 changed in Wales in April 2018 with the introduction of the non-invasive prenatal test (NIPT) in line with recommendations from the UK National Screening Committee. Wales is the first of the four UK countries to introduce NIPT into the screening pathway. As part of the antenatal screening pathway, women are offered the option of a simple blood test (NIPT) rather than more invasive amniocentesis or chorionic villus sampling, if their earlier antenatal tests suggest they have a higher chance of having an affected pregnancy.

More information on the screening pathway can be found here: http://www.antenatalscreening.wales.nhs.uk

There is an increased chance that women aged 35 and over will have a pregnancy affected by Down Syndrome and this chance increases with the age of the woman, as can be seen from the chart and table below.

Advancing paternal age has also been implicated as a risk factor for all three common trisomies although the effect appears small(De Sousa E, Morris JK. (2010) Case-control analysis of paternal age and trisomic anomalies. Archives of disease in childhood 95 (11), 893-897.).  Exposure to ionizing radiation may also affect cell division at the meiosis phase, however studies following significant human exposure such as occurred at Chernobyl or Hiroshima have shown inconsistent results.

All people with Down syndrome will have a learning disability. This means they may be delayed in their development and take longer to learn new things. Around 8 out of 10 children with the condition will go to mainstream primary schools although individuals vary greatly in how they develop and will have different health and social needs. All will need support through school and beyond, however the intensity of the support will vary.

Some children with Down syndrome face other health challenges because of associated congenital anomalies. These include cardiac and intestinal anomalies; visual problems such as cataracts; hearing loss;  frequent respiratory tract infections; and a slightly higher prevalence of leukaemia. As more individuals with Down syndrome are surviving longer, it appears that there may be increased frequency and earlier onset of Alzheimer’s disease. Treatment for all the associated conditions will vary according to severity and need.

With regards to five-year survival, of the 524 babies born live in Wales with Down Syndrome between 1998 and 2012, 10% died before their fifth birthday, 7% did not reach their first birthday. For the live born babies recorded on the CARIS database, it is known that 63.1% had a cardiac anomaly, 4.4% had an intestinal anomaly and 5.8% had hypothyroidism. The cardiac and intestinal anomalies recorded vary greatly in severity and need for intervention.

Trisomy 18 (also known as Edwards syndrome) occurs when there is an extra chromosome 18. Babies who are live-born are born with multiple anomalies with a limited life span. It is a little more frequent in females than males.

As for trisomy 21 (above) antenatal screening is available. Otherwise it will be diagnosed at birth or soon after.

There is an association with maternal age (as is the case with trisomy 21), with older mothers being affected more frequently. There is no evidence available to support other suggested associations which include environmental factors and reproductive technologies.

The outlook for babies with trisomy 18 is poor as they have multiple anomalies. Of the babies who were live born in Wales between 1998 and the end of 2016, 12.9% (n=8) survived to their first birthday. Some babies survive to adulthood but this is rare. All babies will be affected by developmental delay and lifelong learning disability. There are significant associated congenital conditions including cardiac and urogenital conditions. Because of the physical features in a baby born with Edwards syndrome, which can include a small jaw and cleft lip and palate, they may have breathing and feeding difficulties. They will be more prone to infections. 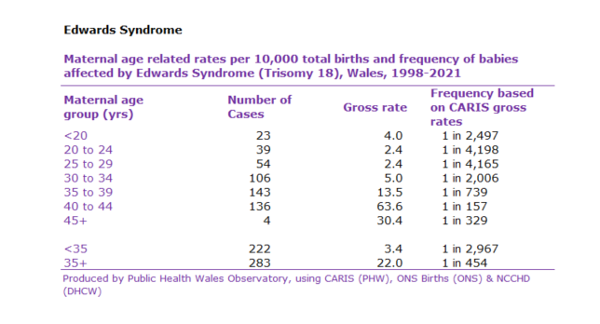 Trisomy 13, also known as Patau syndrome, occurs when there is an extra chromosome 13, making 3 instead of the normal 2. It is the third most common trisomy compatible with a live birth. The additional chromosome 13 derives from the mother in 90% of cases. One in five cases have a Robertsonian translocation. As this can be inherited, parental studies are important to look for a balanced translocation. In contrast to Edwards syndrome, males are thought to be affected more frequently than females.

As for trisomy 21 (above) antenatal screening is available.

There is an association with maternal age (as is the case with trisomies 21 and 18), with older mothers being affected more frequently.

The outlook for babies with trisomy 13 is poor as they usually have multiple anomalies. Of the babies who were live born in Wales between 1998 and the end of 2016 31.8% (n=7) survived to their first birthday.  Some babies survive to adulthood but this is rare.

All babies will be affected by developmental delay and lifelong learning disability. There are significant associated congenital conditions including cardiac anomalies; urogenital and renal anomalies; anomalies of the central nervous system including microcephaly and neural tube defects; eye anomalies such as cataracts and microphthalmia; cleft lip and polydactyly.  As with babies born with other trisomies, they are also more prone to infections. 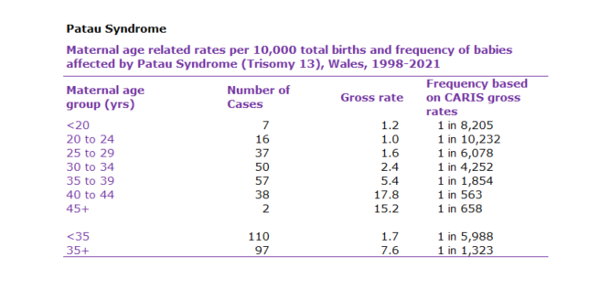 Trisomies account for about 60% of all cytogenetic abnormalities identified in spontaneous fetal losses. The most commonly seen abnormal karyotypes at the time of miscarriage are trisomy 16, monosomy X and triploidy.