Drug deaths at their highest ever levels in Wales

Welsh drug deaths are at their highest ever levels according to a new report by Public Health Wales, with deaths from drug poisoning having increased by 78 per cent over the last 10 years.

The report also highlights that drug deaths may be increasingly occurring in people using drugs on a recreational basis, with a rise in deaths involving cocaine, amphetamine and MDMA collectively accounting for 14 per cent of drug misuse deaths.  These deaths tended to occurred amongst younger people in their 20’s.

In a third of all drug deaths reviewed, ‘no known contact’ was reported between the deceased and any local health, social care or criminal justice services in the 12 months prior to death.

The report recommends action to influence the current legislative approach to drugs policy in the UK, as well as a medical amnesty policy to protect people seeking medical attention relating to drug poisonings.

Drug misuse deaths, a subset of drug poisoning deaths, have increased by 52 per cent over the last decade and by 12 per cent in the last year up from 185 deaths in 2017 to 208 in 2018 – with a current rate of 72 deaths per million population. Wales has the second highest rates of drug misuse deaths in England and Wales regions.

“Drug markets have changed and expanded over the last few years, both in terms of availability, and range of drugs, and this trend is set to continue.  One of the most distressing impacts of these changes is the rise in premature deaths.

“Across Wales there are effective interventions in place to reduce premature drug deaths including specialist substance misuse services and, for opioid deaths, the provision of Take-Home Naloxone.  However, expansion of the Naloxone programme will be required to ensure widespread access to this life-saving intervention.  In addition it is vital that the range of people using drugs are able to make better use of services that can support them, and reduce their risk of harm and premature death.

“Given the scale of problem drug use in Wales, it is likely that every member of the population will know someone affected by, or experiencing difficulties with drugs be they illegal or prescribed, but may be unaware.   Evidence is clear that seeking support early on can prevent escalation of problem use and dependency, however, fear of stigmatisation and social exclusion may be barriers to this.  Consideration needs to be given to how this can be overcome in Wales to prevent future tragic deaths.”

As in previous years, opioids including heroin were involved in the just over half of drug misuse deaths reported in 2018. Poly-drug use, the use of other drugs including benzodiazepines and cocaine, was reported in 49 per cent.

In addition, there has been a more than four-fold increase in the number of deaths involving cocaine over the last five years.  In 2018, cocaine was recorded in 31 of deaths, representing 15 per cent of all drug misuse deaths.

Early education, screening by frontline services and continued support through post-recovery are among the actions needed if Wales wants to reduce the devastating harms caused by gambling, says a new report from Public Health Wales.

Public Health Wales and Hywel Dda University Health Board (UHB) have welcomed the publication of the independent review into the longstanding Llwynhendy tuberculosis (TB) outbreak.

Survey reveals only half are ‘comfortable’ with the state of their household finances.

Dr Chris Johnson, Head of Vaccine Preventable Disease Programme for Public Health Wales, said:
“In Wales, uptake of the crucial first dose of the HPV vaccine by school year 10 in 2021-22 is high at 83.1 per cent, and is at 72.7 percent for the second dose. 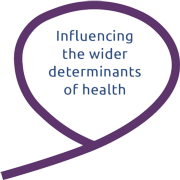