Celebrating the Black LGBTQ+ icons who have shaped LGBTQ+ culture

As the Black Lives Matter movement has gained vital traction this year, and with Pride Cymru’s Virtual Pride Week this week, it’s important to reflect on the black lives that have shaped LGBTQ+ rights. To understand the celebration that for which Pride is recognised today, it's vital that we pause, put down our banners and look into the history books (the ones we don’t get taught at school); and discover the vital figures in the community.

The Stonewall riots of 1969 birthed the concept of the Pride celebration, and so as we continue to celebrate, it’s essential to remember the black LGBTQ+ communities that kick-started and continue the fight for liberation from sexual and racial prejudice.

The Stonewall Inn was the beating heart of the New York LGBTQ+ scene; it became a safe space where gay and trans people could authentically exist without fear of prejudice. However, this all changed on 27 June 1969 when plain-clothed police officers arrested many LGBTQ+ people at the venue. The public arrests incited the famed riot that became a breakthrough moment for the community – at last their voices were heard, at last they were beginning the fight to break free from the shackles of discrimination.

One of the individuals who led the movement was Marsha P. Johnson. As an African American trans woman, Marsha faced relentless transphobia and racism, yet her voice and determination was equally unfaltering. In light of the current black lives matter movement, it’s important to draw on the strength and courage she showed and to remember that we are not alone. During the riots, Marsha resisted arrest and went on to become an activist who fought for the liberation of the LGBTQ+ community. Similarly Sylvia Rivera is known for participating in the stonewall riots, and allegedly throwing the second cocktail in protest to a police raid on the Stonewall Inn alongside Marsha, as well as co-founding the Gay Liberation Front.  Without these figures and the Stonewall riots, we would not be celebrating pride the way we do today. The first gay pride parade followed the Stonewall protests in 1970, as did the creation of STAR (Street Transvestite Action Revolutionaries) and other organizations that supported young transgender people.

The 1980s saw the conception of the ballroom scene in New York; in essence, it was a coming together of the Black and Latin-American LGBTQ+ community in New York through pageantry, fashion, dance and a celebration of sexuality and gender. Originally, the early scene was centered on white people and performers, with black performers often whitened their faces in order to fit in. Performers like Labeija rejected this and paved the way for gay, trans men and trans women of colour to make their mark on the scene, slaying the runway, one vogue at a time. 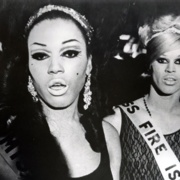 The film Paris is Burning documented ballroom culture through exploring the lives that represented the movement one of those key individuals being Labeija; more recently the BBC’s Pose fictionalised underground drag culture in 70’s New York.

Labeija, the queen of Harlem, immortalised drag culture so that it could continue to be celebrated today. As a self-proclaimed drag mother (the head of a drag house or family which drag queens are apart of) she took responsibility to nurture other black and queer men to celebrate their sexuality and gender identity; with Labeija as your drag mother one was given license to live an authentic life. All the hurt of parental rejection and the loss of friends and family now had a vehicle for expression in the ball scene, and Labeija’s legacy lives on not only in performance, but also in the community she took under her wing. Paris is Burning documents her willingness to mother performers who had lost their family due to their sexuality or gender identity. In the documentary Labeija states ‘When someone has rejection from their family, when they get out in the world, they search. They search for someone to fill that void”. She goes on to say, “I know this from experience because I’ve had kids come to me and latch hold to me like I’m their mother or father because they can talk to me’’.

Today the progression of the movement continues through courageous advocates who still face daily prejudice and discrimination across the world. Perhaps one of the most impactful of all expressions of courage in the face of adversity is through art. 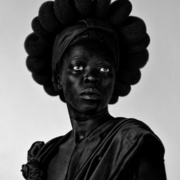 Zanele Muholi exemplifies this through her work, highlighting the disconnect within South Africa between the constitution and the promised uphold of equality versus the ongoing bigotry and acts of violence targeted at the LGBTQ+ community.  Art in the form of social commentary is a trope immortalised through the ages, and Muholi’s work is no exception. Her photographic work of the LGBTQ+ community challenges its audience, as the figures within the work confront the viewer with a stark gaze, however each is nuanced with a sense of detachment, pride, hurt or compassion. Black artists, performers and activists like Muholi are now gatekeepers of the LGBTQ+ community they represent the past and present direction of the movement.

To celebrate Pride is to also celebrate black women, black men, black trans men and women, black lesbians, black bisexual men and women, and those who are non-binary and/or gender non-conforming. If we do not celebrate people of colour in the LGBTQ+ community (past and present), we silence those voices and damage the foundations upon which the movement was first built.

20/10/20
The communications team need your help

As the national lockdown for Wales approaches we'd like to make a video with the help of YOU - our staff.

20/10/20
Congratulations to our Public Health Hero

The Welsh Government has today (19 October) announced a new two week ‘fire-break’ lockdown  – here’s what it means for staff.