In September 2013, Public Health Wales undertook a review of wind turbine generated noise and health effects. The main findings were that: 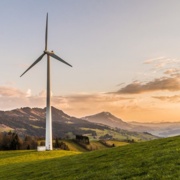 We have reviewed the evidence on wind turbine-generated noise and health.

This review identified no evidence to suggest that noise from wind turbines has a direct physiological impact on health.

Perception of adverse health impacts associated with wind turbines may be influenced by turbine appearance, concern about their effect on local environments and personal and economic factors.

We acknowledge that annoyance from wind turbine operation may cause stress and anxiety which can, in turn, affect quality of life.

It should be noted that noise can affect different people and communities in different ways.

The majority of evidence reviewed came from studies undertaken outside the UK.

Evidence pointed strongly toward the visual impact of turbines as a modifying factor in annoyance. The concept of ‘annoyance’ is complex, subjective and difficult to impartially measure.

Public Health Wales will continue to work with local authorities (as regulators of turbine generated noise) and others, including the public, to understand and, where possible, minimise local population health concerns associated with wind turbine noise.

This statement will be reviewed periodically to reflect the evolving evidence base in this area.